Sidechain compression is a production technique which is probably most commonly associated with dance music, although it is also used more discretely in other genres, either way this process is a very useful technique to make specific instruments more definitive within a mix.

As you may be able to derive from the title, this technique involves the use of a compressor which is controlled by an external ‘side-chained’ key input signal. A similar approach was used in the ‘kick drum signal generator’ tutorial which is available HERE, although this tutorial will almost work in reverse to that.

It can be quite tricky to explain, but the basic principal is that the presence of one instrument will cause another to be turned down or ‘ducked’. Most noticeably heard in dance music production, the kick drum is used as the ‘key input’ or ‘sidchain’ signal to duck the keyboards and synths to give that pumping and pulse feel. Suffice to say it is easier to explain when heard…

Here is a sample of what a kick drum and synth sound like together normally.

And here is the same instruments with sidechain compression applied.

This tutorial will be based on a dance song although how this technique can be used in other genres will be explained.

For this tutorial we will be using two samples which are each one bar in length, one of which is a kick drum and the other is a synth. 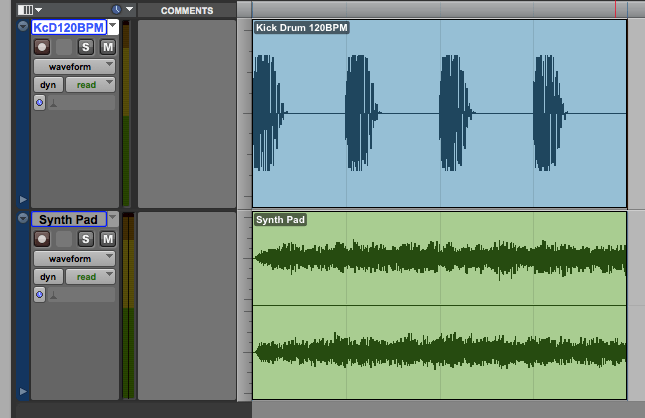 When played together, they should sound like the first audio example above.

Setting Up The Sidechain

You will need to add a compressor onto the synth track which will control its level, any compression plug-in which offers a key input will be fine so for this tutorial we will use the standard in-built Pro Tools compressor. 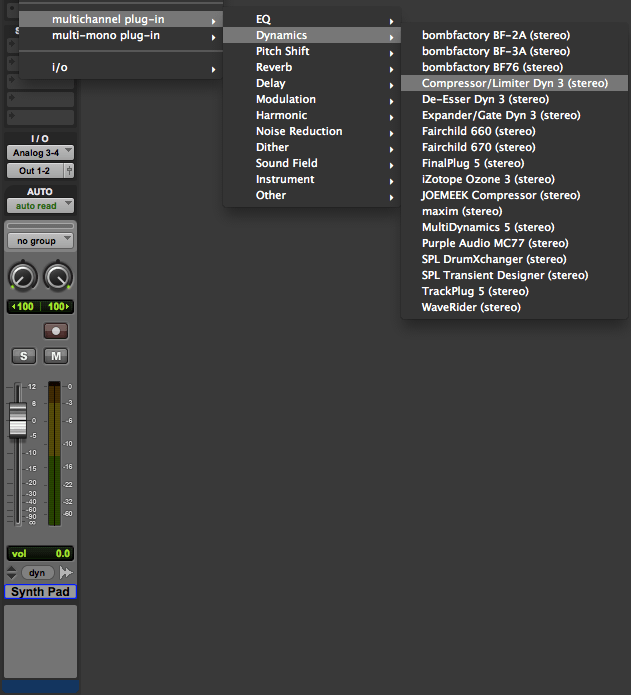 The compression settings for this kind of production comes down to how it sounds after the kick drum signal is applied, so we will leave these for now.

In the top left hand corner of the plug-in you will notice a small key symbol, this is where we will set our ‘key input’. After clicking the drop down menu you can choose a mono bus which is currently not in use, for this guide we will use the mono bus ‘bus 1.L’, you will also need to activate this input by clicking the tiny key symbol in the top right hand corner of the compressor plug-in as well. Nothing is currently being sent down this bus so we will need to set that up now. 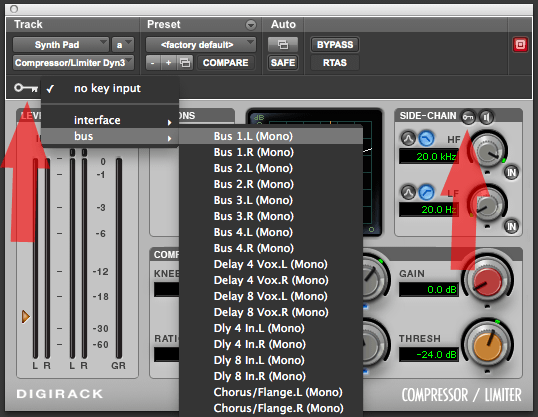 On the kick drum track, simply apply a send to the channel matching the one on the compressor, in this case ‘Bus 1.L’. You will then be presented with a fader for that send, bring it up to unity (0dB) and we are good to go!

Quick Tip: Faders can be brought to unity level by Option_Clicking (mac) (Windows: ALT_Click) the fader.

You may already hear the effect begin to work, fine tuning the compression settings are the final step in the process to get that tight pulse feel.

The first setting you will want to play around with is the threshold, just keep bringing it down slowly until you are happy with how hard the compressor is kicking in (the lower the threshold the more the synth will be ducked).

As this effect is very much time based, we will need to spend a bit of time tweaking the attack and release of the compressor to fit the tempo of our song, a fairly quick attack works best to make sure that the kick sound and ducking of the synth are in time, the release should be adjusted very slowly until the rhythm of the compressor is right. This again is fairly tricky to explain but the main aim when adjusting the release value is to have the level of the synth rise in time before the kick is heard again. You will notice as soon as you apply the effect that there is a rhythm produced, you should also notice how this rhythm is changed through the release value, simply adjust to taste and you should be left with something which sounds a little something like the second sound clip above.

Hopefully this tutorial has given you an idea of what sidechain compression is and how it can be used, this can be carried across all genres of music production and it is really up to your imagination as an engineer.

This technique could be applied to the kick drum and bass guitar of a rock song which are fighting over the low end frequencies.

Have fun and remember that there is never a danger in experimenting with this technique!